Letter to Todd Young, replying to his mis-reply to my letter

We sent six letters (two to each member of Congress), and we got one reply! While that’s pretty abysmal, it is always a little exciting to hear back from someone in the government. 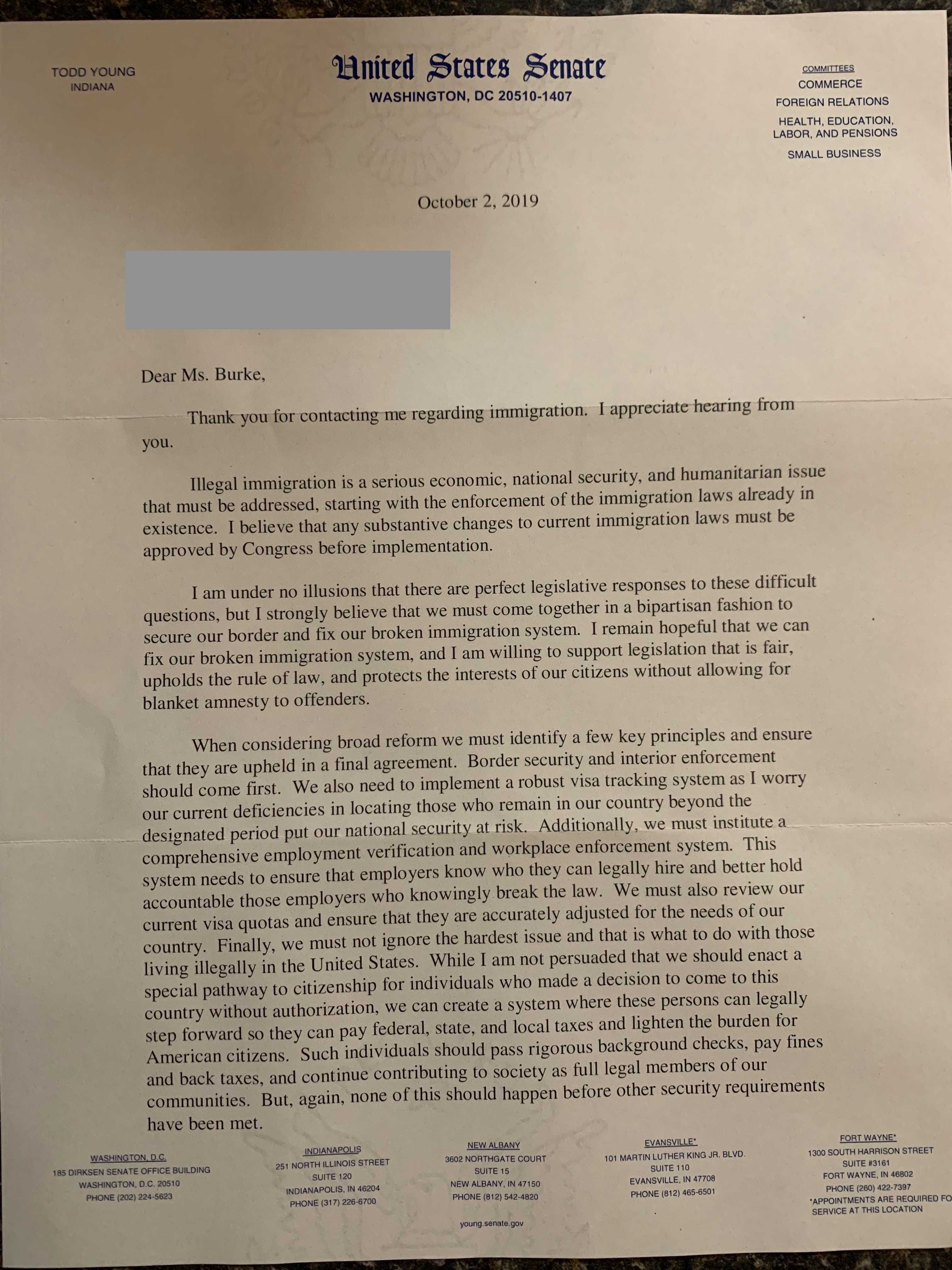 Unfortunately, Mr. Young didn’t send back a letter that was apropos of the one that we sent him. Here’s our reply.

Thank you for your reply to our letter about refugee resettlement! We have a couple of comments that we’d like to make in response.

First, our letter was about refugee resettlement and your reply was about illegal immigration. We realize that the two issues may seem similar, but they are actually quite distinct. Illegal immigration is an issue about people crossing the border without legal authorization. Refugee resettlement is about legal immigration. The current president has repeatedly slashed the refugee resettlement ceiling, ignoring the desperate worldwide humanitarian need for a safe home for millions of people. We asked that you support keeping the ceiling at 80,000 - 100,000 persons. The ceiling for FY2020 is 18,000. Historically, it has been at least 70,000 and as high as 230,000 during Reagan’s presidency [1]. It is unconscionable that the “greatest nation on earth” can’t extend a hand to assist people who are terribly disadvantaged. One way to do this would be to support H.R. 2146 (GRACE Act) when it reaches the Senate.

Second, I think your policy goals are exactly backwards. You described a plan to improve border enforcement, improve visa tracking, crack down on employers, and, finally, scrutinize people who have been living peacefully in this country for years so that we can collect taxes. Instead, we need to deal with the realities of our current situation. (1) The US has many people who have come to this country without following proper procedures. They are human beings in our communities who live under the threat that the life they’ve settled into will be forcibly broken apart. (2) The US has many people who are drawn to our country because of the opportunity for a better life. The crossing is difficult and not worth going back.

We’re not advocating that we continue in a situation where illegal border crossings are normal. But we think it is inhumane to shut the door completely and throw out the “illegals”. (1) The US should start at the end of your plan, and provide immediate temporary resident status to people who have come illegally. This will allow people to enter into a known and stable legal situation, including paying back taxes. This would acknowledge that the majority of people have improved our communities. (2) The US should implement a system that makes it easier for people to come to work in the US temporarily. Most people want to follow the law. If droves of people are risking their lives to cross the border, we should learn that our immigration system is wrong and needs to be adapted. We’re adults and have the power to reshape the laws of our society. There is no moral absolute that requires low or no migration; rather the ideal would be that people could move to where they can build their best life. It’s obviously not practical to have an infinite limit, but it’s equally obviously not practical to have zero, or a cumbersome system that provides disincentives for law-abiding behavior.

[1] https://www.migrationpolicy.org/programs/data-hub/charts/us-annual-refugee-resettlement-ceilings-and-number-refugees-admitted-united Over the past few years, I have had the pleasure of working with several people who have legally immigrated to the United States. The system is not easy. It’s typical that people trying to immigrate hire an attorney to help with the requirements and just to know what’s up in the process. My coworker receives very short notice of required meeting times, sometimes directly and sometimes through the attorney. The outcome of interviews is often not known for months. After changing his address, all communication from the government was changed to the new address, except for the only copy of his green card, which went to the wrong address! How messed up is that! This is a well resourced man who is fluent in English. Do we want a system that can only be successfully navigated by the very skilled and only with a little bit of luck? Let’s build a system that is actually straightforward and humane.